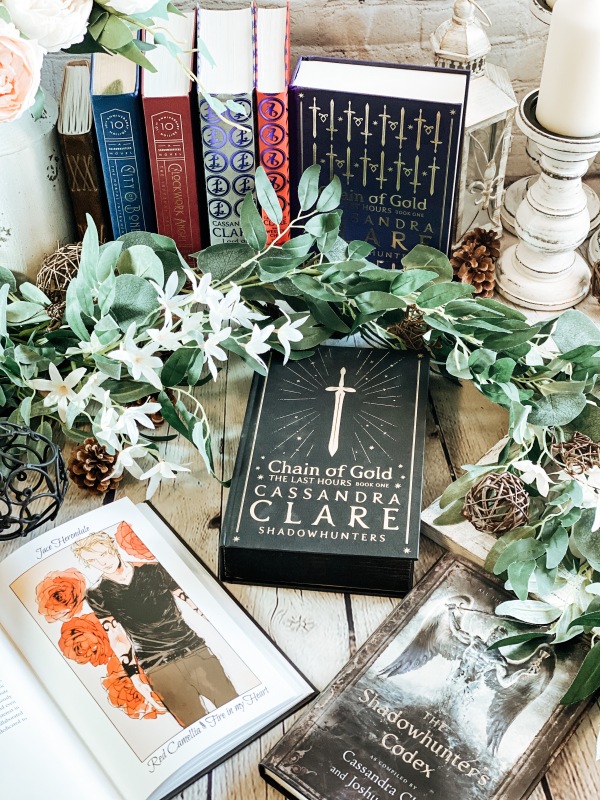 “People aren’t born good or bad. Maybe they’re born with tendencies either way, but it’s the way you live your life that matters.”

I’ve spent the last few months immersing myself in Cassandra Clare’s Shadowhunter world… again. I rewatched the movie and the TV series. I re-read/read all of the books in the series, except for CHAIN OF GOLD, which starts a new trilogy

I have loved this series from the first time I started reading THE CITY OF BONES in 2007. I immediately fell in love with Jace and the rest of the crew and the world they lived in. Since then, with each new book added to the series, I become more and more attached to these characters. I’m not ashamed to say that Cassie has brought me to tears (both in happiness and sadness) many times.

I’ve read some of the books 4-5 times and I never tire of revisiting this world. Every time Cassie writes a new story, I can’t wait to get my hands on it and rejoin my favorite characters on their adventures. 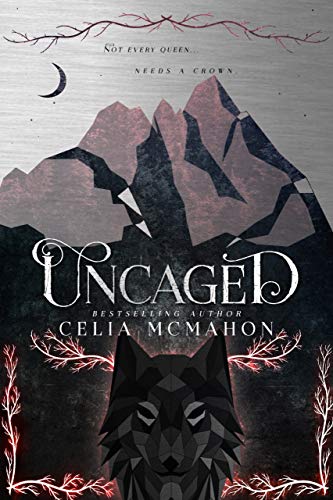 “Princess of wolves and men, bringer of life and death. On a path of fire, you will walk. And out of the flames, a beast will rule.”

UNCAGED is the stunning sequel to Celia McMahon’s debut UNSPOKEN, the first in her fantasy trilogy set in a world of curses, wolves, and war.

Not every queen needs a crown.

After escaping Stormwall, Izzy and Fray have finally crossed through the Archway and into The Old Kingdom in search of allies. But finding a place within Fray’s former pack is harder than they imagined. When Izzy’s father warred with the Gwylis, it made a lifelong enemy of the Rowan name. Fray’s betrayal of siding with Aquarius in the war makes him no less an enemy to the pack.

Izzy struggles to understand her newfound magic and build a relationship with her new family, but when the new king’s soldiers arrive in The Old Kingdom, Izzy must fight to secure the protection of her new home. With war looming once again, Izzy is thrust back into the life she tried to leave behind.

As danger mounts, past, present, and future collide between kingdoms, and the lines of allegiances are drawn. Izzy must decide who she is willing to fight for, and where her loyalties truly lie.

Thank you to Celia McMahon and The Parliament House Press for an eARC in exchange for an honest review.

In the sequel to Unspoken, we finally get to see more of the world outside of the New Kingdom. We get to see the other side of the ravaged land and those affected by the centuries-long war. We watch as Izzy and Fray struggle to find themselves and hold onto each other as they try to build a new life beyond the Archway.

I love this world that Celia has created and was thrilled to be diving deeper into it. I was also happy to see the growth in Izzy’s character as she learns more about what it means to be human and wolf, her powers, the world beyond, and her new family.

Izzy’s strength lies in her determination to protect the innocent and those she loves. As is the case in stories like this, it can also be her weakness. Her fear of losing them and the life she loves, creates turmoil and fosters doubt. As she realizes and accepts her path, she is finally free to do what needs to be done, even though the price may ultimately destroy her.

“I finally knew what part I had to play, and the realization was a lightning strike from the heavens. Like a beast, finally uncaged.”
— Izzy

I can’t wait for the final installment in the trilogy and to see what awaits as Izzy fights for her kingdom.

Be brave. Be uncaged and unbroken.

Set in a kingdom of warring lands, demon curses, and hidden magic, UNSPOKEN is a fantasy for fans of Maggie Stiefvater’s Mercy Falls Series and Sarah J. Maas’ Throne of Glass.

Princess Isabelle of the New Kingdom has lived her entire life in the confines of her palace. She spends her time hunting for the poverty-stricken Voiceless—people of the Old Kingdom who warred with her kingdom and ultimately lost—and dreaming of a world beyond the walls of her home. As the only remaining child of the king and queen, she is to be married off by her eighteenth birthday.

“My father said that magic died long ago. It was evil, cursed, and wicked. My father is a liar.”

When Izzy witnesses the use of forbidden magic in the woods outside the palace, she is attacked, and saved by an unknown man. Soon after she discovers her rescuer is a Voiceless servant in the castle named Fray, she befriends him to seek out the magic users who tried to kill her. Fray agrees to help, but not before Isabelle discovers the servant boy harbors a secret the king has tried to bury—that he is a Gwylis, people of the Old Kingdom who made a pact with the demons of the underworld for the power to transform into giant ferocious wolves. But to shift into a beast, Fray must be able to speak the words to do so. If he is to thwart the attackers from killing her entire family, Izzy needs to cure the ailment that took away his voice.

“Sometimes one action—one death—can spur a movement, sway the cosmos, and move the stars.”

But curing Fray holds more danger than she ever thought possible. The lies of her parents and the risk of putting her own life on the line seems as destructive as falling for the servant boy. If Isabelle is to save herself and Fray, she’ll need to face enemy Gwylis, cross paths with usurper kings and princes, and decide what side she is on—human or wolf—or lose her kingdom forever.

I was first attracted to this book by the cover, it is gorgeous. I hadn’t heard of this author before, but read the synopsis and it sounded interesting, so I was in.

The story is told from the perspective of the princess Isabelle (Izzy) and thus we learn about the world through her eyes. She is young, naive and sheltered. Born to a domineering mother and a tyrannical father, she is the last surviving heir to the kingdom. As such, she finds herself caught between the expectations and responsibilities of her birthright and wanting to be free from them.

As she learns about the lengths that her family has gone to take and hold onto power, her sense of justice and wanting to make things right carries her down a path that will ignite change within herself and the kingdom.

The story also contains an interesting take on the werewolf origin story that I enjoyed.

Since this is told through the eyes of the main character, we don’t get much of an idea of the world at large. I assume that we will definitely see more of this world as we move into the 2nd and 3rd books of the trilogy.

In addition, since we see everything from Izzy’s perspective, we are privy to her vacillations of thoughts and feelings about her family, what is right and wrong, love, and her own strengths and weaknesses. This sometimes makes for a confusing journey, but reminds us that she is human, with flaws and doubts, even as she is trying to be strong and do what is right.

This is a quick and interesting read. Overall, I enjoyed it and am looking forward to learning more about the world and the characters in the rest of the series. Wonderful debut from a new author that I am thrilled to have found.

This is a portion of the books I purchased in December. Some as Hardcover or Paperback, most as Kindle.

Now, the goal is to read all of these… LOL! How to find the time.

Resolution for 2020 is to read at least 1 book per week. What about you? What are your reading goals for 2020?

“Maybe this was the reason why I always felt like an outsider growing up. I never belonged in the ordinary. I was born to live amidst magic.” — Enzo Griffin

Enzo and Ava Griffin never expected to face their worst nightmare on Christmas eve. Though they always dreamed of magic, they never thought of its actual existence, and the consequence it carries. During a violent snow storm, they’re visited by foul creatures called Shadow Spirits. The eerie beings kidnap both of their grandparents, vanishing into a portal found on the bark of a tree.

After the frightening incident, Enzo and Ava discover Henderbell, a world full of magic, wonder, and secrets. But an impending doom is revealed to them. The king and queen of Henderbell are missing, and their absence could trigger the destruction of this new-found world and the human realm. On the quest to find both Henderbellian rulers, Enzo and Ava learn of a curse placed upon their own bloodline. But other ancient enemies have risen from their graves, seeking revenge for a past unknown to them.

Enzo and Ava find friendship, courage, and love as they face unimaginable darkness in the quest to redeem the world they belong and the one they live in.

Can you discover the curse hidden in the shadows?

Full of magic, mystery, and adventure, Henderbell: The Shadow of Saint Nicholas is the perfect read for fans of Narnia and The Golden Compass.

Listen to the music composed by Efraim Alencar, Born Amidst Magic, a piece inspired by the novel, Henderbell:

I thoroughly enjoyed this alternate take on St Nicholas. J.D. Netto has created a magical new world that you’ll want to visit again and again. The story is a dark atmospheric journey for 2 siblings as they learn the truth of their family history and discover they’ve inherited a future full of magic and possibility. The cliffhanger left me wishing the next book was immediately available. Alas, no such luck… I am now trying to wait patiently for the next installment 🤣

The only thing I was slightly disappointed about was that I expected Enzo’s character growth arc to be a bit more than it was. I was left feeling like he was still a bit too self-absorbed, bitter and childish. Then again, he went through a lot in a very short time, with more yet to come. Plenty of time and experience left to move through that arc in the next book.

Happy to have found a new author to add to my #tbr list. I now want to move on to read his Whispers of the Fallen series.

Thanks for joining me! As one of my resolutions for 2020, I decided to start a book blog.

I know, I know, there are already hundreds of thousands out there already, why bother? Honestly, I asked myself the same question many times and it always stopped me from doing it. But then I decided, why not?! My main goal for doing it is to keep track of my thoughts on what I’ve read.

Please be advised, I am not a writer and don’t pretend to be. That talent is not one of my gifts. So, please bear with me, if you join me on this journey… I may not be eloquent or have a flair for the written word, but I love reading and throughly admire and respect all those who create the stories I lose myself in. Thank you!